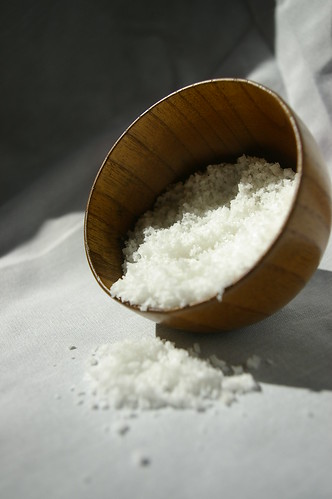 Sea Salt, a photo by Happy Krissy on Flickr.

According to the LA Times 61% of Americans believe that Sea Salt has less sodium than table salt. NOT true. It’s still salt just from a different location.

Sea salt is salt that comes from seas, oceans and a couple of lakes around the world. Different colors and tastes occur from different minerals being in the water. That’s why some of my friends prefer pink sea salt and others don’t. When you strip away the color and the extra minerals you are left with the main ingredient, salt. The Mayo Clinic confirms that Sea Salt is still salt.

For years we Americans have been taught that the way to avoid heart disease is to avoid salt. According to some studies salt isn’t the bad guy the American Heart Association has claimed. A recent European study published in the Journal of the American Medical Association found that those with heart disease that ate higher levels of sodium lived longer than their low sodium peers. Since that article was published in a medical journal most Americans missed it.

Americans are very busy and often take the pre digested information that popular magazines dish out about health. (puns intended!) This pre digested information frequently contradicts recent medical studies. So what’s the average American without a medical degree to do? Ignore the salt debates? Eliminate all salt? Switch to sea salt? If you’re serious about your health you’ll want the latest most accurate information. That’s found in the articles in respected medical journals such as, the Journal of the American Medical Association and the Lancet.

If do decide to reduce your sodium intake you need to be looking at the food in your pantry and freezer, not the salt in your salt shaker! Convenience foods pack large amounts of sodium and calories and carbohydrates into small packages. Small packages that really aren’t good for us! Changing the types of food you buy and moving toward whole foods and away from canned and processed foods is harder than simply demonizing salt. It’s a lifestyle change that would have health benefits even if table salt or Sea Salt are part of your new diet.

All Unwound’s Etsy shop has had another item selected for an Etsy Treasury.  My hand knit Ecru Spa Wash Cloths.  Knit in a fancy stitch to provide gentle exfoliation. The Treasury is called Array of Talent.  Please check it out, there are many lovely items in it. A Treasury is a collection of items that…

My lovely SIL gave me more books!  The first three in a series I’ve never read.  The main character, Marcy,  owns an embroidery shop that also sells yarn.  The series is called, “An Embroidery Mystery. ” They are the perfect books for a Winter’s day.  Settle in on the couch with a cup of tea…

2020. It’s been a surreal year. Almost everyone’s plans for the year have been upset. Sadly it’s been a year where many people have lost their lives due to the Covid 19 virus and violence. The entire world has been turned upside down. Social distancing is the new norm! This may go on for months,…

Selling things online requires excellent clear photos.  I’ve read this on several ETSY business sites.  I experienced this yesterday while looking online for a certain stamp set.  Photos that were mostly camera flash reflection didn’t get a second glance.  Dark photos obscured the details of the sale item, so I kept looking.  Photos that clearly showed the stamps in the set got my attention. These…

This site uses Akismet to reduce spam. Learn how your comment data is processed.